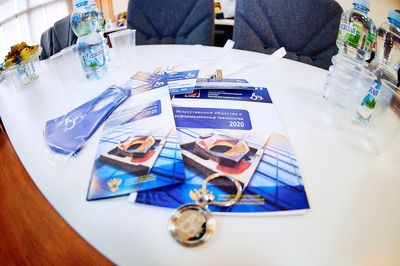 News
International conference “Artificial Societies and Information Technologies”
On September 22, 2020, on the basis of the Central Economics and Mathematics Institute of the Russian Academy of Sciences, an international conference “Artificial Societies and Information Technologies" and a seminar “Supercomputer Technologies and Artificial Societies" were held, which brought together representatives of several organizations, including: CEMI RAS; Lomonosov Moscow State University; Keldysh Institute of Applied Mathematics RAS; Shanghai Jinghua Technology Company; Institute of Management, Economics and Innovation; Ufa Federal Research Center RAS; Ataccama company. The conference discussed a number of issues related to the support and development of research in the humanities with the use of information technologies, in particular, new horizons opening up with the development of supercomputer research in artificial societies.
See more

With the support of GAUGN, the joint work of Makarov V.L., Bakhtizin A.R. and Epstein J. was published.

The main goal of the paper is to summarize selected developments in the field of artificial societies and agent-based modeling and suggest how this fundamentally new toolkit can contribute to solving some of the most complex scientific and practical problems of our time.

This paper consists of several parts. The first one considers the history of agentbased models. The second part is devoted to some interesting models of this class related to epidemiology, and the third one considers agent-based modeling of pedestrian traffic and evacuation of the population. The fourth part is devoted to issues of demographic processes modeling, and the fifth to the simulation of transport systems. Ecological forecasting is considered in part six, while the seventh is devoted to issues of land use, and the eighth part to urban dynamics. The ninth part considers models used for the reconstruction of historical episodes, and in the tenth part, we will briefly touch on the issues of conflict simulation. In the eleventh part of the paper, we will consider issues related to studying social networks using an agent-based approach. Agent-based models of economic systems are considered in the twelfth part. Undoubtedly, the scope of application of agent-based models is wider, but we decided to focus on these indisputably significant areas.

Welcome to the website of the Electronic Scientific and Educational journal "Artificial Societies"!

Social sciences, including economic ones, are on the verge of a large-scale and effective use of a new tool for obtaining knowledge. These are so-called agent-based computer models (ABM). The Laboratory of Agent Modeling of the CEMI RAS undertook the courage to initiate an intellectual movement in our country in this field. The journal that you see before you, acting as an analogue of the english-language Journal of Artificial Societies and Social Simulation (JASSS), is the most convenient place for publishing works on the subject of artificial societies. We, however, do not want to confine ourselves to purely computerized calculations and are ready to consider works of a more general nature. What will be the jornal, depends on all of us - on our activity and intelligence. We are waiting for the readers' letters with questions and suggestions, as well as articles for publication on the pages of our magazine.

Editor-in-chief of the journal, Academician of the Russian Academy of Sciences V.L. Makarov